Last week, it was reported that an exploit was being used to spread the ROKRAT malware. What made this so interesting is that Flash was being used by an APT group after what seems like a period of absence. We couldn’t help wonder what had changed and just how this latest exploit worked.

In this post we will walk through a traditional Flash exploit, and look to understand just how this latest sample works to bypass some of the hardening introduced in the Flash environment.

Let’s begin by taking a look at an exploit that had a role to play in some of the latest Flash mitigations, CVE-2015-5119, commonly known as the HackingTeam Flash 0day.

Back in July 2015, Hacking Team experienced a breach in which a number of internal emails, application source code and exploits were released into the wild. Included in the leak was an exploit for what would become known as CVE-2015-5119, a remote code execution flaw in Flash 16.

The vulnerability was categorised as a “Use-After-Free“, meaning that memory was being released to Flash for later use without updating all object references.  Let’s take a look at a quick sample which will trigger the exploit:

Compiling this ActionScript code, and execute the SWF using Flash version 16.0.0.287, we find that the _ba ByteArray ends up pointing to free’d memory.

If we review the source code of Flash, we can get an idea as to what is causing this flaw. First, we have a ByteArray with a length of 0xfa0 which we assign an object to. If we review the corresponding source code, we see that the “ByteArrayObject::setUintProperty” is responsible for handling this assignment:

Here we see that the “value” parameter, which in our case is an Object reference, is passed to the “AvmCore::integer” function in which the type is checked:

Our parameter is then passed to the “number” method:

Here we see that our Object is passed to “AvmCore::atomToScriptObject“, which converts the value back to a “ScriptObject“:

Finally, our “valueOf” property is invoked:

Now that we understand the vulnerability, let’s take a look at just how this was exploited.

When exploiting this kind of flaw in Flash, we want to populate the free’d memory with an object which will allow us to control execution or modify memory…. enter Vector.<uint>. A Vector object is quite straightforward, being initialised with:

When initialised, the object will consist of the following memory layout:

The length of a Vector.<uint> can be retrieved in ActionScript with:

And the contents of the vector are retrieved with:

Let’s update the exploit to show this in action.

Here, we see the following steps are taken:

In a post dated July 16th 2015, Google Project Zero referenced the HackingTeam exploit and announced that they had worked with Adobe to introduce a number of methods to harden Flash. The full post can be found here, in which 3 such hardening methods were introduced:

Of the 3 mitigations, we see that the above technique of corrupting the length property of a Vector.<uint> has been mitigated in 2 ways. First, Vectors were moved to a separate area of memory, isolated from any potential overflows which may allow tampering with the “length” property. Secondly, a number of checks were introduced into the Vector object to ensure that if the “length” property was corrupted, the runtime would detect this corruption and halt execution.

This length validation method was implemented as an XOR key. Similar to stack-canaries, a number of attractive properties from the Vector object were XOR’d with a key, and the resulting value stored, allowing a simple way to detect a corrupted value.

After the mitigations were introduced, things seemed to quiet down. Then, a new vulnerability surfaced, CVE-2018-4878.

The details of the vulnerability were kept quiet, so like many security researchers, we grabbed a copy of the malware and began to reverse engineer the sample.

Taking a copy of the SWF file and disassembling, we find that on loading the SWF, a request is made to a C2 server:

The response contains a key, which allows the embedded SWF exploit to be decrypted: 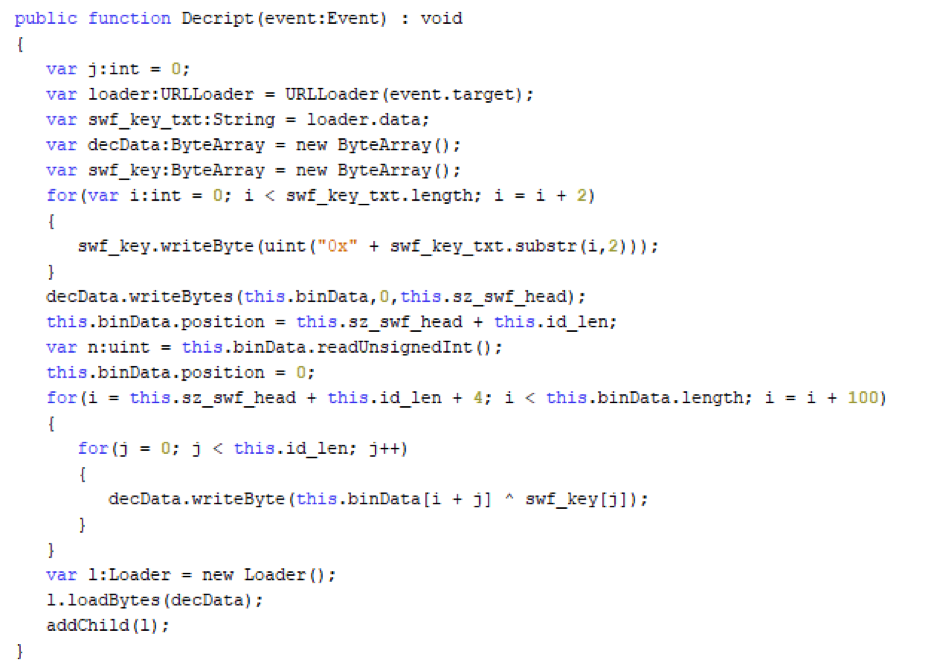 Unfortunately, this is where things came to a halt. All of the samples we analysed contained C2 servers which were no longer accessible, meaning that we were unable to recover the 100 byte XOR decryption key to analyse the exploit. Additionally, those lucky enough to hold the decryption key were not too forthcoming with sharing, meaning all we could do was wait until the details were disclosed.

Slowly details did start to become available, in the form of redacted, partial screenshots and posts focusing on the flaw without showing the path of gaining a R/W primitive. After a few late nights, we were able to recreate the vulnerability and understand just what was happening to bypass the introduced hardening.

First, let’s show how the vulnerability is triggered with a simple example:

The flaw here exists within the DRMManager’s “initialize” call, which is expecting an object implementing the DRMOperationCompleteListener interface. Before this can be used, the object is free’d by setting “this.listener” to NULL, forcing the allocated memory to be released by the garbage collector.

If we continue reviewing what was disclosed of the exploit, we see the addition of a timer:

This timer calls a new function which checks for the UAF condition:

This timer is used to check at periodic intervals if our “danglingpointer” object has been free’d, and is now pointing to free’d memory. Eventually this is the case, which allows us to populate this free space with another object.

At this point, things get a little hazy. Of the screenshots and samples we found available, none appeared to share the details of the class used to generate the object populating this memory (specifically the “Mem_Arr” class). We did however find a way to exploit the vulnerability, recreating what we believed this class was doing, however if you have a copy of the malware, we would be interested to see just how close we were in matching the malware’s exploit.

We know from discussions online that the primitive being used to gain control over Flash was a ByteArray, meaning that we want to populate the free’d memory with a ByteArray object: 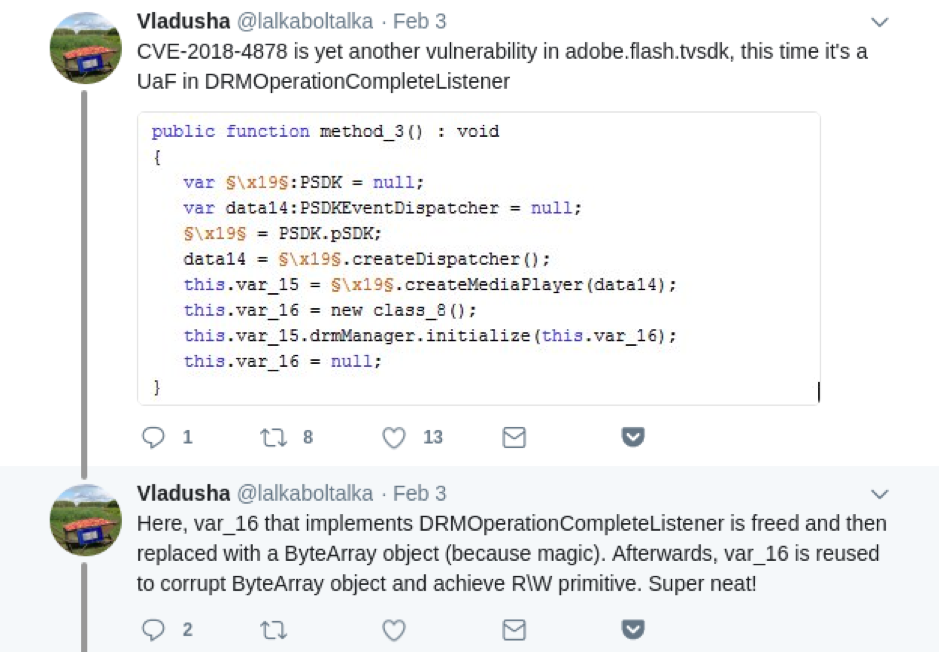 The issue however is that we know that a ByteArray will likely not be allocated in the place of a free’d DRMOperationCompleteListener object due to size differences. We can however create a new class which extends the ByteArray class and add additional properties to extend the object size. To do this, we create a new class, “Mem_Arr“:

Additionally, we will also modify our “MyListener” object to contain a number of additional properties:

The reason for this is to ensure that both “MyListener” and “Mem_Arr” objects are similar in size, allowing us to replace the free’d “MyListener” object memory with a “Mem_Arr”.

We will also update our “uafcheck” function to dump memory from the “Mem_Arr” object to make sure we are on the right track:

Now, if we execute this SWF, we find that our trace log contains the following:

Whilst this may just look like a random sequence of DWORD’s at first, let’s actually look at what we have. First, we see a value of “0x31“, which is actually the “position” property value that we updated the ByteArray/Mem_Arr object to.

Reviewing the source code for the ByteArray class, we know that a ByteArray actually consists of the following properties:

One of these properties is “m_position” which holds the “position” property. This means we are on the right track, and now have the ability to manipulate the underlying memory of a ByteArray.

What actually interests us is found in the “m_buffer” property, which is a pointer to a Buffer object containing the following:

Here we see one of the mitigations introduced in the Google Project Zero post, a number of properties which are used as XOR check values. We need a way to access this structure by dereferencing the m_buffer address.

To do this, we added a new class:

And added a reference to this class from our Mem_Arr class:

Executing this this, we see the following returned logged values:

Here we clearly see our ByteArray length of 0x512, again indicating that we are in the right place. Let’s overlay these values to the ByteArray object:

So here we have the ability to modify the underlying memory of the “Buffer” object.

Interestingly, we also see here that we can recover the XOR key via the “check_copyOnWrite” value which is 0 ^ KEY, so in this case we know that our XOR key is actually b179ed8b.

And that’s it… when triggered, the Buffer length is set to 0xFFFFFFFF, base address is set to 0x00000000, and the security checks are updated.

Using this primitive, we now have total control over the Flash environment, with the ability to overwrite arbitrary memory locations:

Source code for the exploit can be found on the MDSec ActiveBreach github.

That’s not all folks

Whilst recreating the above vulnerability, we actually came across another interesting way to manipulate memory contents without having to use a ByteArray or Vector.<uint> and having to deal with the XOR protection.

By leveraging object references, like that used above to read the “m_buffer” property, we actually have a pretty stable R/W primitive.

For example, let’s modify our above POC to attempt to read an arbitrary memory location. Here we will set the “o1” reference to 0x41414141:

And invoke a new function added to Mem_Arr, RW():

And rerun our sample:

Here we can see that using this object dereference, we can overwrite any memory location with a value of our choosing.

Again, we do not have access to the full malware sample, but we would be interested to know if this technique was used by the original exploit.

In our next post we will be looking at how you can use the above primitive to launch custom shellcode. So what is the takeaway from all this? Well the first is that Flash exploitation can still operate in place of hardening added by Adobe, especially in instances such as a Use-After-Free, where we have total control over property values and are in a position to leak memory.

Secondly, there are multiple ways to manipulate arbitrary memory in Flash when you have the ability to corrupt objects, although hardening has been introduced in areas such as Vector.<uint> and ByteArray, Object dereferencing can be just as useful.

This blog post and research was completed by Adam Chester of MDSec.