CACTUSTORCH is a framework for payload generation that can be used in adversary simulation engagements based on James Forshaw’s DotNetToJScript tool. This tool allows C# binaries to be bootstrapped inside a payload, providing reliable means to bypass many common defences. Currently CACTUSTORCH supports the following payload types:

Prior to this, it was not possible to invoke shellcode injection directly from multiple formats with the exclusion of VBA macros (more on this later in the post). CACTUSTORCH has a self-contained C# binary which accepts a binary name and base64 encoded shellcode to inject. Additionally, it borrows concepts from @armitagehacker / CobaltStrike’s VBA macro injection whereby it selects the 32 bit executable to inject into.

Generation of payloads for the supported formats already exists in several frameworks, including Metasploit and Cobalt Strike. There are however some drawbacks to how these payloads are generated.

In Metasploit framework the following payload formats work as such:

In CobaltStrike, the following payload formats work as such:

CACTUSTORCH offers a number of improvements on current payload generation that are currently beyond the capabilities of the public frameworks:

A video demonstrating these steps is shown below:

As part of the process for streamlining adversary simulation engagements so that more time can be placed into creating more sophisticated and bespoke attacks, Vincent has created a CACTUSTORCH aggressor script to facilitate this.

After loading the aggressor script, the following menu is presented as an option under the “Attack” tab. You can now select the payloads you want to use and options, it will generate the payload and host it for you. In terms of the VBA code, it will be presented in a textbox where it can be copied from and pasted into a Word VBA Macro. 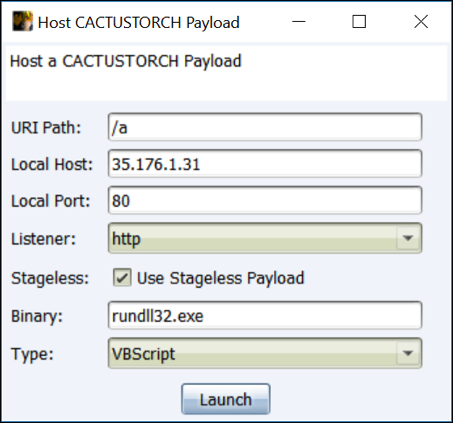 The aggressor script is demonstrated in the following video:

The scripts, proof of concepts and aggressor script addon is created by Vincent Yiu of the ActiveBreach team. We would like to also thank the following people for their contributions: